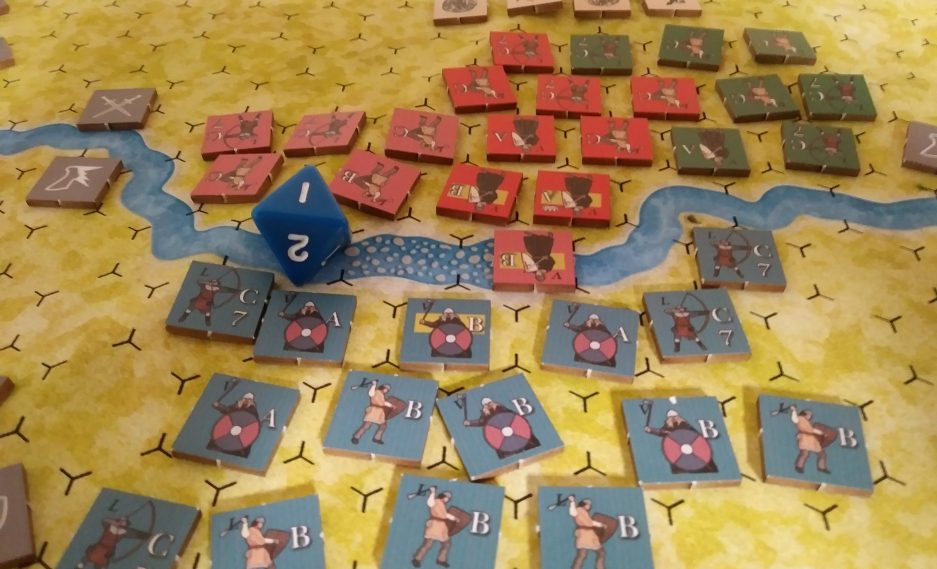 Welcome to Swords and Chit! My aim is to focus on discussing and reviewing wargames. There are two primary reasons I wanted to start blogging about my wargaming experience: as a relatively new wargamer coming from a background of euro games, a lot of things in the wargaming hobby are going to be new to me and I hope to provide a fresh voice for those who might be on a similar journey into this area of gaming. Second, I have a very strong preference for games set in the Medieval period or earlier – although that isn’t where I’ll exclusively play, it is what I will focus on more than anything else. So I am glad you discovered this blog, and I hope you stick around for future posts!

The Viking invasions of Anglo-Saxon England happens to be one of my favorite historical periods. I enjoy the feats of Alfred before he became known as “The Great”, and even the historical events leading up to and following Alfred’s reign. It is a fascinating period in history, and if I’m honest I root for both sides in the historical conflicts. There’s something about the Danes that appeals to me, and the entire conversion and conflict saga that ensues makes for absolutely wonderful storytelling, and this game helps capture that storytelling aspect.

One of the first things I remember loving about this game was that one side begins with absolutely nothing on the board. There’s a built-in asymmetry in the game, which is one of those gaming buzz words that I absolutely enjoy. Little did I know, back in 2018 when I backed the Kickstarter, that this game would be one of the stepping stones on the weird path to lead me into Wargames. So while this isn’t truly reflective of my first impressions on the game, it was my first time revisiting the game since the beginning of this year and, well, my perspective on this sort of game (and games as a whole) have transformed a bit since my last play of the game.

I didn’t get to teach this one to Carl, but did take the time to teach it to someone new to the game (in the past, my wife was my opponent and she only would play it on occasion as she still strongly prefers Euro experiences). I was able to play as the Vikings, having allowed my opponent to choose his preferred side, and what followed was a pretty ruthless and bloody massacre by the end. The Saxons stored up forces in the south, letting the Viking hordes mercilessly take all of the northern areas and begin a foothold into Wessex. While he was still strong in a few territories, the game swung hard in the final round we played to where the Vikings had a crushing victory on the map. In spite of this, my friend enjoyed the game and I think he wants to play it again the next time we get together (which might be in the next few weeks)

Insight #1: Early invasions will happen along the east coast

Upon paying closer attention to the order of the Viking leaders being drawn, the first 4 cards all enter from the same sea (well, one is Reinforcements but still) so that’s a huge thing to take into consideration on both sides of the battle. As the Anglo-Saxons, the forces are likely to begin either North of Central on the island and work inland. The south is, in general, far better defended and reinforced from turn-to-turn. Even if the Vikings make a surprise push into the southern region early, it’ll come from the eastern part or circle from the north to the western coast, meaning the Saxons could have some time to potentially react and reinforce accordingly. I say could, of course, because it is entirely possibly that the maneuver could go completely unopposed because…

Insight #2: Expect to get an activation or two and alternate, but prepare to face four

I am yet to see it happen in the ultimate extreme, but there is a chance that a player could get both activations at the end of one round, and then open up with both activations at the beginning of the next round. For the Saxons, that is hopefully a lot of recruitment, maneuvering, reinforcement, and potentially retaking of a key area or two throughout the map. Of course, the Vikings will be able to push far into the map with four activations, as that would include two leader draws among those activations and a lot of blood getting spilled upon the soil. Two activations in a row isn’t uncommon. Just be prepared, your opponent could potentially go 3-4 times before it ever comes back to you and a LOT can change by that point.

Insight #3: Know your strengths and lean on them

One side of the battle gets swarms of invaders to chip away at territories in England to secure victory points. The Vikings’ greatest strengths come from the size of their armies coming every round and the Berserker forces whose power in battle is unmatched. These Vikings aren’t here to take an area and sit on it with heavy standing armies – they need to push aggressively to keep the defender reeling while claiming valuable recruitment points for the Saxons. Those Saxons, on the other hand, are at their best when on the defensive. It cannot be overstated how key those Fyrd troops are, which only come into play on defense. Yes, their dice are not good. Yes, you may get only 2 of them. But those are able to absorb the first incoming hits from the Viking forces – something that they don’t get as a benefit as an attacker. Plus the defender strikes first, providing yet another benefit of those Fyrd – they CAN hit. The other strength the Saxons have defensively is the ability to reduce the Viking movement range. If that combat goes to a second round, the Viking leader moves one less space than is printed on the card. Suddenly those 4 moves becomes 3, potentially stranding them short of reinforcements or from their other target city on the map. The Saxons don’t need to beat back the Vikings completely, just delay them long enough to win.

Insight #4 – Leave yourself a path for strategic withdrawal

There are three non-blank varieties of die sides that can be rolled in the game: hit, flee, and command. While the distribution of the sides varies based on the unit, the importance of the command side cannot be overstated. For the Vikings, it can allow you to strategically withdraw units from battle to either freely reinforce an adjacent area or to reduce your deaths in a defensive measure. For the Saxons, it lets you weaken the current area to make the next one harder to destroy. Both sides can benefit from the roll – or choose to ignore it. However, there’s a condition: you have to be able to move the unit to an ADJACENT territory that has at least one of your units. You want to know how many times I would have used a Command roll if I had an adjacent unit? Too many, that’s how many.

Each round the four colored cubes will be drawn from a bag, and each side has two cubes matching their armies. The catch is that when a cube is drawn, you can only activate armies that contain at least one unit of the matching color. So while the temptation as the Viking player might be to move all of your strong Berserkers with the leader, by strategically leaving a few on the map you’ll allow yourself the chance to activate more than one army when that red cube gets drawn. Plus, there’s the consideration of battle dice, where you have to have at least enough guys of the matching color to roll all of their available pool of dice – something to manage both in the movement of your forces on the map, but also in how you tactically take losses during the battle to maximize your dice rolled each round.

A lot of folks end up regretting the games they back on Kickstarter. I lucked out with my first backing, as the game was delivered within a few months, included the expansion essentially for free, and the game itself is really fun. It isn’t the heaviest Wargame on my shelf (nor has it ever been, as War of the Ring has been on my shelf for over 5 years now) but it doesn’t need to be. It was always that option there to pull out if I was wanting something like War of the Ring but in a shorter time investment. And now that I’ve taken the plunge into Wargames for 10 months, I’m still really happy to keep this one on the shelf because it is both a game I can teach to most new players and one I can enjoy with those who play Wargames. It sits as a step above a game like Undaunted: North Africa, and probably close to on par with Commands & Colors.

The game has its share of randomness, from the order of activations to the dice rolls in battle to the card draw from your small deck – there’s no getting around that. There have been times when I’ve been forced to play that Treaty of Wedmore card, knowing it triggers the end of the game before I am ready, simply because that was the only move card I had to play that turn. It’ll happen, and you’ll just need to plan for the run of bad luck to happen. Bank on the game ending Turn 5. Count on taking losses in an attack. Brace yourself for a shortened movement with your leader because they draw that lucky 5 Fyrd card for defensive reinforcements in that scarcely-defended territory. Those things all happen.

But what also happens is fun and engaging times playing a game that is a little different than anything else on my shelf. Watching the devastation unfold as a Viking horde raids inland is fun, and seeing the scrappy defenders build up to fend them off in key areas provides some really tense moments where the game could go either way. Few things are more fun than to see that wimpy Fyrd roll two hits when you expected uselessness, or to see victory slip away because you rolled an imperfect roll making every one of your remaining troops disappear to the Fled box. I wish the minis in here weren’t so, well, mini, and would gladly trade those tiny troops for cubes. But as it stands, this game remains a keeper, and one I’ll eventually get around to introducing to Carl so he can see what this game is all about.

Published by Swords and Chit

View all posts by Swords and Chit

One thought on “Insights and Impressions for 878: Vikings – Invasions of England”